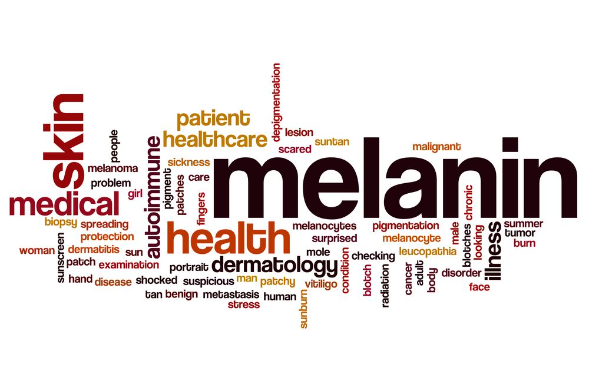 "Caused by increased or decreased storage of the body's melanin and / warehousing exogenous dyes into the skin. Seen Physiologically is the skin color due to its thickness and its nature of the stratum corneum, epidermis and connective tissue, blood, blood color, the presence of carotene and essentially by the melanin. The melanocytes in epidermis & cutis are to melanin synthesis capable. The melanin pigmentation of human skin is genetically determined, with not the number, but the activity of the pigment-forming forces is crucial. The skin of a black man therefore contains as many melanocytes like the skin of a white man ". 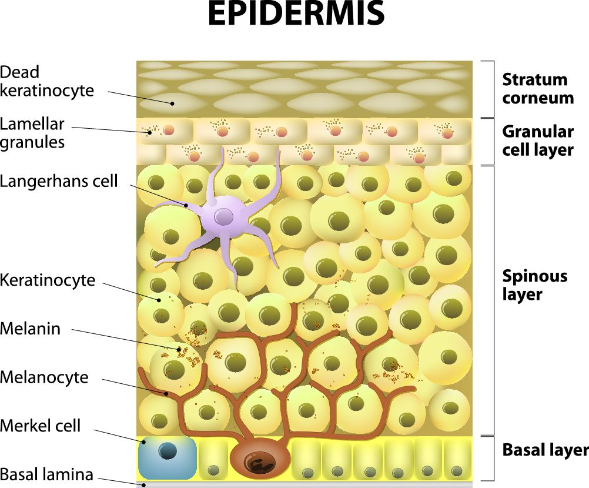 hypo- or depigmentation by lack melanin 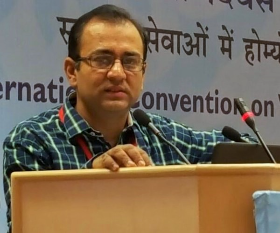 Every now and again something happens that re-affirms your belief in homoeopathy. This is a telling of just one of those times....

A healthy skin is a source of pleasure, not only to its own but also to the one who looks at it.

Everybody longs for blooming, glowing and healthy skin that greatly shapes the personality of a person.

Vitiligo is an idiopathic acquired circumscribed hypomelanosis and is characterized by localized or segmental (one or more dermatomes) or generalized white patches on the skin.

Every case of Vitiligo calls for study of the patient's constitution which includes various aspects of his as well as the in-depth study of the mental sphere such as emotions, psycho-social background, behaviour and personality pattern etc.

Homoeopathy is nothing but analysis and evaluation of such factors affecting the human constitution to determine the disease, diagnosis and the exact treatment in turn.

Here is a presentation of a case of 14 yr old boy with vitiligo that got a favourable response after receiving a simillimum.

A.  a boy of 14 yrs came to me with his mother on 01/08/2007 for the treatment of vitiligo spots on his back, shoulder and forearms. He is of average height, medium built, light complexion and pale face, dry skin and lusterless dry hairs. Even though it was a rainy day but not at all a cold day but in spite of that he was wearing a full sleeves high neck T-shirt and a jacket over it which made me a bit puzzled. Then I inquired from Ashok that why are you wearing so many clothes? He kept mum and looked at his mother’s face. After a pause she replied that Doctor he is very much sensitive to cold and often suffers from repeated infections such as colds, otitis media, or pharyngitis. That’s why we always protect him from draft of cool air.

“About 2 yrs back we observed a white patch over his left shoulder; we thought it might be due to some seasonal allergy, so we did not consult any doctor but after 3 more months another patch develops besides it. Also the body hairs over this patch started becoming white. Then we started taking it seriously and consulted various skin specialist but without any significant change. They use to give us some ointments to be applied over patch under sun-light along with number of internal medicines. But none of the medicines were acting. The white patches were increasing gradually and by 1 yr they had reached to back and forearms as well. We were much tensed and were changing one doctor to another but without any result. Then somebody suggested your name, can it be treated Doctor?”

I asked for more information about any significant past or family history. But there was none except for his delayed walking and occasional talking in sleep.

On further questioning his mother told me that though he loves dancing but he never performed. He is having terrible stage-fright; he can’t perform in front of strangers. But at home he can dance for the whole day.

When inquiring about the nature of ‘Ashok’ and his behaviour with his friends and relatives, his mother narrated that he is very shy and sensitive, he even weeps when reprimanded. He is very caring by nature, his grand-mother is bed-ridden and he takes very good care of her. But at the same time he is very much dependent upon his father. He can’t go anywhere alone. For doing even a small task he needs his father’s permission. Regarding friends, he is having very limited friend circle and amongst those friends he is having a good boy image. He shares his games and other things with his friends but is afraid of taking their things.

On inquiring about his desires and aversions, one peculiar thing came up; His mother informed that when he was born, he never liked her own milk; he used to refuse taking his mother’s milk but could easily take cow’s milk without any problem.

Through out the interview I was observing that the child was very shy and was looking at the floor only. He never answered any of my questions but each and every time looked towards his mother so that she answers whatever she feels best. He was very quiet and self contained. Anxiety was clearly visible on his face and hand gestures.

I felt that I needed to use a deep-acting remedy matching his whole personality and constitution, if at all possible, in order to get the favourable response. So I set about trying to assess Ashok's character.

Based on the reported symptoms and observations I started repertorising following Synthesis Repertory 9.0th edition and I took these rubrics for repertorisation: 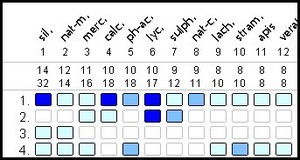 So, I decided to prescribe

For the first few weeks there were no signs of improvement.

after one month and again there was no improvement. This time, before thinking of any other remedy

I thought of increasing the potency from 1M to 10M. I patiently waited for another month; there were slight signs of improvement.

after a month and this time the improvement paced off. Vitiligo spots started improving from the elbows, scapular region, sacral region. There was no change in small lesions on dorsal aspect of both hands and left forearm. In fact, it was increasing near left forearm but thankfully downwards, obeying Hering’s law.

The patient was under the treatment for a period of 1 year.

And in this year he was prescribed one

were given along with placebo. Now he had been relieved of his leucoderma.

He came to me again this year for abscess on the right side of thigh which also is responding well to Silicea.

One thing which is worth mentioning here is that during the course of his treatment not only his vitiligo spots improved but also his behaviour. Now he is not at all a shy person and is more confident. He is answering on his own and that too intelligently. Even though the anticipatory anxiety is still there but even in school he is doing well and is concentrating well in his studies. I think by the grace of the Almighty, Homoeopathy transformed the young man’s life.

One of the fascinations of homoeopathy is the extraordinary power that is produced in otherwise inert and everyday substances, by the potentisation process. Samuel Hahnemann, the founder of homoeopathy, used the stock in trade of his contemporary pharmaceutical colleagues, by taking herbal tinctures as the basis of his serial dilutions. Insoluble substances were ground and diluted serially with lactose powder up to three times prior to dissolving in the standard alcohol/water mixture and submitting to further dilutions.

When ground, dissolved, diluted and potentised in this fashion, ordinary sand becomes the great polychrest, SILICEA, which can influence profoundly any system of the body and has immense and diverse healing powers.

In our texts the summations of Silica often start by likening the need for this remedy with the need for internal "grit". The patient is often refined, delicate, sensitive and yielding. Generally speaking the emotional level is fairly well-balanced in Silicea patients except for problems with self-esteem. The self-confidence of the patient is often very poor.

They feel very fragile and are inclined to feel that others will abuse this. As soon as another person voices his opinion or sticks up for his own cause they feel neglected and humiliated. Criticism makes them feel even worse, causing them to cry or get very angry. And when others show them sympathy they feel humiliated because they believe it is done out of pity for their weakness.

Silicea is usually living up to the image of the father, there is a lack of emotions, and it may be hard for him to relate to other people. There is disunion of inner self and personality. Silicea exists very much in this image and is concerned with how others see him, wanting to fulfill that image. It is very important for a Silicea child to do well for his parents, and he will want to prove to them that he knows everything in school. A Silicea child is insecure, and the insecurity comes for the lack of connection to feelings and emotions.

For one reacting from an observed self, his body or doing actions become the centre of attention, and he is extremely concerned with how others perceive him; alternatively, he has a tremendous fear of being observed (Calcarea and Magnesium). This kind of patient is an outsider within himself. He looks at his self through the eyes of other people, and acts out from what he feels others think. There is no direct participation in life itself, and he has an inability to go from sensation straight into functioning.

They'll show the world how good they are, how much they give without asking anything in return. This then becomes a means in itself, and their self-worth and their image become dependent on this role. But underneath they feel worthless, as if they don't deserve to ask anything for themselves.

They can be very shy, especially when they first meet someone. But they also want to be liked so they will behave in a kind and pleasant manner.

This remedy is indicated in persons with light complexions, pale face, lax muscles and fine, dry skin. They are nervous, irritable, and suffer from a lack of nutrition as a result of imperfect assimilation. 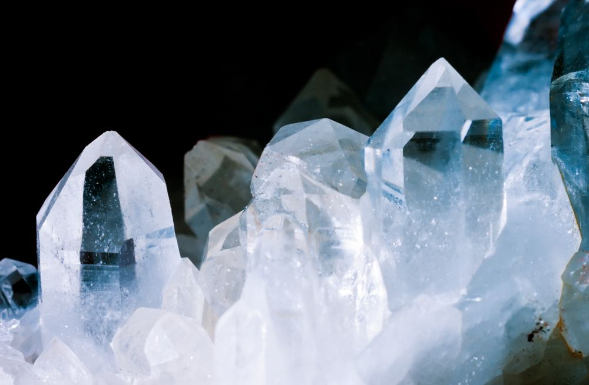 This remedy is indicated in persons with light complexions, pale face, lax muscles and fine, dry skin. They are nervous, irritable, and suffer from a lack of nutrition as a result of imperfect assimilation.

The patient may be mentally sharp and physically in poor shape. If you study the mind also you see a peculiar combination - of timidity and obstinacy. Timidity means lack of - courage. So, when you find children with lack of courage, you think the children cannot have will power. But the Silicea children prove to be obstinate. Also the child may be stubborn or hard outside but soft or yielding inside like a coconut or an oyster in its shell. The oyster's shell is only the hardened secretion of the oyster and contains of silica (0.17%) and calcium carbonate.

Boger uses the word 'Stubborn' in a general sense. The disease may be stubborn, or the patient may have stubborn - abscesses, non - healing fistulae or stubbornness in mind.

Together with the totality of symptoms (Repertorize) - the knowledge of this rubric - the miasmatic assessment it should be possible  to get an Idea. Dont forget to look wether it is a cold or warm remedy. So you quickly have an idea - how the case might be solved.

plus to SILICEA (SIL) - a special tip from my practice - www.praxis-anjatrinklein.de

Clinical tips are only dedicated to the source study, but not replace a doctor and subject to the terms of PROHOM.